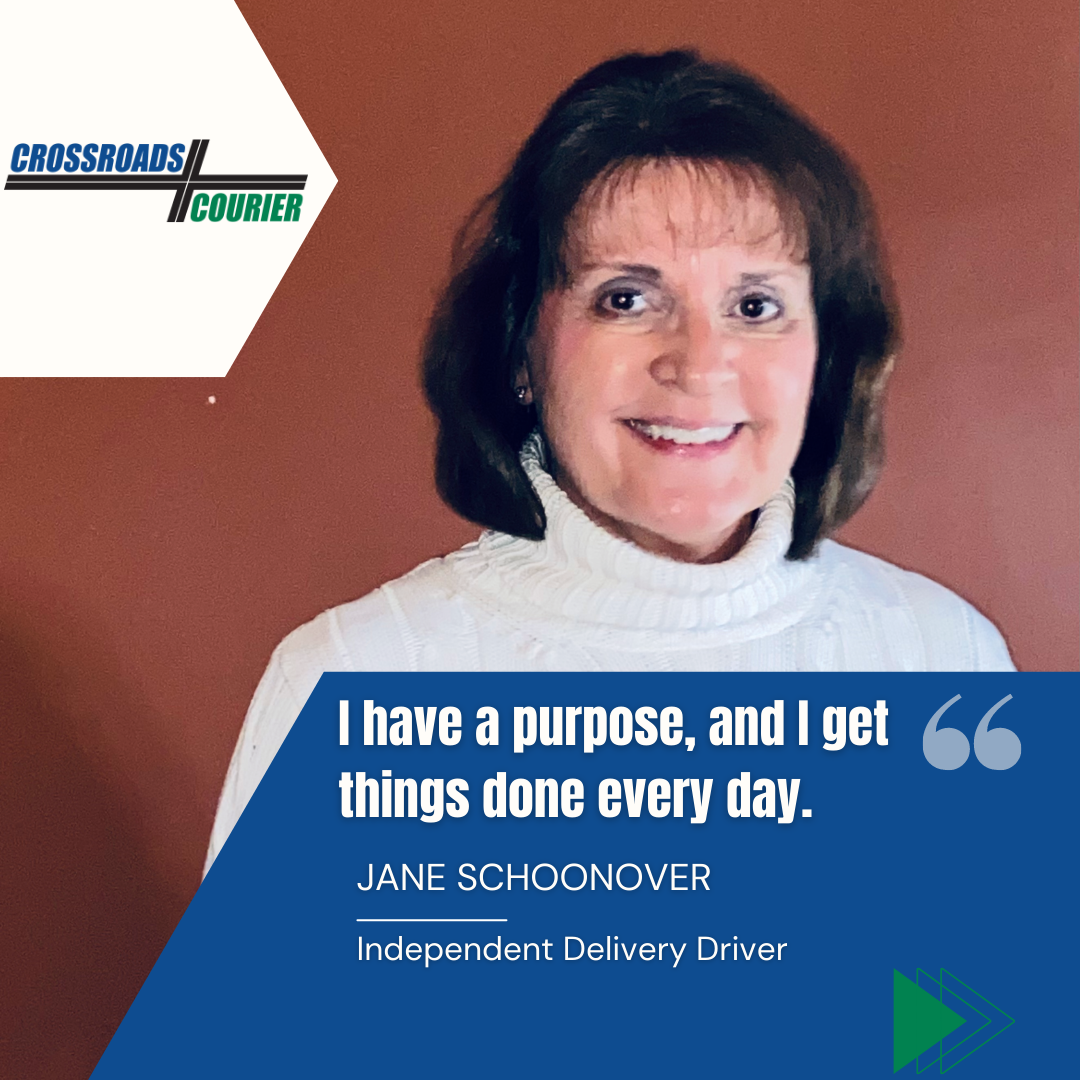 Whether it was the Air Force’s Lockheed C-141 Starlifter, her “little” Honda CR-V, or one of her 3 Kia compact crossover “never let me down” Rondos, Jane Schoonover has always delivered. She’s delivered figuratively and literally. It’s who she is.

An independent contractor driving for Crossroads Courier for thirteen years, Jane says her keys to success are simple. “I do what you’re supposed to do. I show up. I dress well.  I’ve always had an interest in and a willingness to learn. I always want to project professionalism and take a professional approach to each route, each day.”

One of six children in her family, Jane grew up in Webster Groves, in the southwestern suburbs of Saint Louis, Missouri. “We all went to Catholic grade school with the nuns. I was a good student, and I think it was the nuns insisting we should want to do everything right that stuck with me. I always wanted to do my best, to do everything right,” she said. “I also developed the need to know that I have a purpose, that I’ve accomplished something at the end of the day.”

Money was tight. She knew her parents couldn’t afford college for all of them. One of her teachers suggested she take the Armed Services Vocational Aptitude Battery, a test that measures developed abilities and is predictive of potential academic and occupational success in the military. An Air Force recruiter contacted her and guided her into a field he thought would be a good one for her based on her test scores – avionics – the electronic systems used on aircraft. “He convinced me I was smart enough to do avionics, so off I went to tech school in Biloxi, Mississippi to learn avionics maintenance.”

Upon graduation, she received orders to McGuire Air Force Base in New Jersey. Her job was maintenance and repair of radar and navigational computers on the Air Force C-141 Starlifter, at that time the Air Force’s long-range strategic airlifter, designed for transporting large loads of cargo or passengers.

“It was 1975, and I was the first woman in the shop. Many of the men didn’t think I could do it. They were all thinking that I wouldn’t last,” she said of her assignment. “In the 70’s there were maybe ten women in the Air Force for every 100 guys. Maybe it was because I grew up with four brothers, and maybe it was my inclination to learn, always do my best, and to finish each day having accomplished something. But I worked hard and proved myself. The men, they eventually admitted to me ‘We were all thinking you couldn’t cut it, but we would choose to work beside you over anybody else.’ Jane believes her adaptability to different environments and situations won their respect.

Her life’s journey eventually took her back to Saint Louis and a job with McDonnell Douglas, who was competing with other defense contractors for a Defense Department contract to build air-launched cruise missiles. Jane’s role was to test guidance systems. As interesting as that might seem to many, for Jane it “bored the heck out of me.” Always looking to stretch her horizons and her knowledge, she was transferred to the Harpoon missile program, tracking altimeters for the missiles. She eventually went to work in a new depot where Harpoon missiles were brought back from the field for repairs.

It was then that she realized what was important to her. “It was my sense of purpose that needed to be fulfilled. I was running tests and so forth. But I didn’t get that thrill of accomplishment. I would end my day saying I don’t think I did anything today.”

Jane met her husband in the cockpit of a C-141. They married and raised three sons. Both in the Air Force, they lived the military life, moving around the country and across the Pacific to Okinawa. Through it all Jane worked different jobs. Eventually her need for purpose led her to Crossroads Courier.

Back in Saint Louis after his 2009 retirement from the Air Force, her husband found a job listing on Craigslist posted by the courier company. “Here’s something you might like,” he said to her. Jane remembers Crossroads asking if she knew the St. Louis area, quizzing her over the map. She read some information about Crossroads’ business. Medical and pharmaceuticals. Banks and beauty supplies. Small animals. “Small animals? I was having my doubts,” she said.

Crossroads offered Jane a contract driving opportunity, running flower delivery routes for a new customer in the St. Louis market.  “I like trying new things,” Jane says. “It was the flowers that drew me in. Flowers are always received with a smile.”

Asked what she did to get started, Jane thoughtfully answered, “I realized early on that you must be a tenacious person. It sounds so simple, pick something up, take it to another place. But so much is involved in the routing and timing. The dispatchers do a good job routing you as best they can. But what I like about this profession is if you’re good and enjoy challenges, pushing yourself to be your best, you must know how to route yourself. You must think on the fly, so to speak. This is a great job for those who want to be their own boss, own their own business and who care about making a difference and having that sense of purpose, of getting something good done every day.”

Jane loves the independence and flexibility she experiences in her flower delivery routes. Some drivers like scheduled routes that are the same each day. However, she enjoys the challenge of variety she experiences delivering flowers. “Some of the deliveries are the same each day, such as certain businesses and a funeral home or two. But I plan all the unique, individual stops around the regular ones, and I enjoy that,” she said. “I prioritize the funeral homes and some of the businesses over the homes and other deliveries. I enjoy packing my car carefully and orderly, so nothing is damaged and the packing is efficient,” she continued.

Crossroads appreciates drivers like Jane who bring initiative, common sense, attention-to-detail, problem-solving, and the desire to help others with their work every day. Jane thinks about taking care of the products being transported, and she prioritizes safety. “Good stewardship is how I see it,” she says. “Plus, safety. Good driving means watching out for the other drivers on the road,” she commented.

As an independent contractor delivering for Crossroads Courier, Jane’s sense of purpose fits well with Crossroads’ values and culture. “Crossroads is very focused on the customer,” says Jane.

“They want great service to be the norm for them. The people at Crossroads are very positive-minded, and they want all of us – their drivers  – to do well. They are honest, above-board, and ethical. Crossroads is a great organization to be associated with.”

What advice does Jane have for those who are considering entering the profession? “It’s important to establish relationships with courier companies who share many of your values,” she advised. “I think you want to make smart decisions, to do things right, and to have as your purpose getting things done and helping people. You never know which delivery truly makes someone’s day better.”

What about women considering careers in transportation? “I think it’s great, this has been my favorite job since leaving the Air Force,” she answered. “I think women are plenty capable, and there is the aspect of the flexibility and independence that you can earn. Women often have a lot of responsibilities to juggle, and this profession can give you the flexibility you need.” Despite her time in the Air Force doing critical work on military transport planes and fighter jets, working on cruise missile projects for McDonnell Douglas, and other jobs along the way, Jane says that “driving for Crossroads as an independent contractor is the closest thing I’ve had to an actual career. I have a purpose, and I get things done every day.”

Everyone’s life has its paths. Jane’s eventually led to a satisfying role in delivering good things to people – to perhaps brighten their day or help them meet a critical need.  Just as we in the delivery business never know when that package we’re delivering makes a big difference in someone’s life, we, in turn, never know when our life’s endeavors will deliver good things to us.

previousWelcome to the Crossroads Courier Blog!